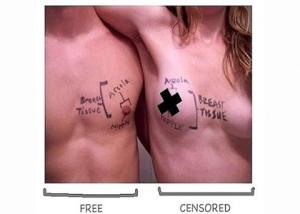 As this question arises, so too, do the primitive screams of a number of disappointed men deprived of their daily carnal pleasure. Because, obviously, it is very difficult to find a picture of the upper ventral region of a human woman, in order to delve into the lecherous enjoyment of the breast, areola and nipple which vitally acts as the home for the mammary gland which secretes milk for the sustenance of children, anywhere other than a daily newspaper- right?

For my despairing male counterparts (not all, obviously, have this stone-age attitude) there are many books that can be found where the breast of a woman can be oggled at daily. It just entails a library card and a familiarity with the science section of your local library. Just a pre-warning for the deprived carnal beast, the breast of the female may even be shown alongside that of a male with a clear anatomical description so that you can really understand the inner workings of a woman’s degraded ‘tits’. Maybe then you’ll realise that they are merely a larger (due to the production of oestrogen in women), mammary gland wielding, version of yours. Then maybe they don’t seem so sexy, so lustful, or erection provoking.

A woman’s breasts are certainly something to be honoured, in a way that only science does, and not debased and objectified by the eyes of the leering man on the tube, on a lunch break at work, or quite simply having a wank in his room. This is no infringement on freedom, there is no all imposing ban on such images, no law against it. There are just simply places and times when such a thing is much more lewd and derogatory, and hence, a daily paper is not the place for a pair of overly sexualised breasts as the whole concept itself should be nullified.

All I see in this primitive cry of men is fear- fear that one day the white male may not hold predominance over all. This is one step towards removing the male species from the epicentre of society; your pathetically construed arguments against something such as the ‘No More Page 3’ campaign just reiterates why this is essential.

And no, I’m not ugly, flat chested, overweight, or in any other way jealous of these women- before you ask.